My Original brief was quite ambitious- too ambitious. I wanted to create a first person shooter with open world aspects, but I was working alone, so this caused constraints in what I could do; note that when I wrote up this brief, I was unaware of how long it would take to learn both MAYA and Unreal to a decent standard. A lot of my time during this project was taking up learning, and this wasn't always practical learning- there were plenty of written reports- which went along side practical exercises. I wish I had better foresight when creating 3D models in MAYA earlier in the project, as I didn't make much useful assets- which would be in the final product of the game.

Now I will break down parts of my brief and evaluate them in greater detail.

I intended to create the clown enemies as a gang who dressed as clowns, and not actual clowns. I was going to make one player model and add different masks to it- to make it seem like there was more variety in the game. This was a good idea, and I wish I stuck to it, but I struggled to make a player model. The one I have was made quite unprofessionally- it was made up of an arm and a leg and a body that I each made separately- so they didn't match. Because of how bad my clown was I changed the theme of the clown to more of a horror theme as opposed to the more realistic theme I originally intended; I think that this is one of the few positives of the clown model- the face of the clown looks quite scary- but also quite silly, as it was not what I intended to make. I don't think I even attempted to make a mask, probably because I forgot, they would've been a challenge but I think I could have achieved it.

The Player
So my game doesn't really have a player, the player's  really just a gun and a pair of arms- I decided to ditch creating a player model for a first person shooter, as it would just be a waste of my time- because you wouldn't even see the player. The game also doesn't have any reference to the story I made up, and there is no vigilantes in the game, as I did not have time to make them.

I made a player which had axis mappings all set up- it had a sprint function, and a crouch function, it was quite a basic setup but it worked. However, I did not have any visual representation of a character- no arms, or weapon, or any animations. I purchased a weapon from the Unreal Marketplace, and I added to the player, however it had no animations, and at the time I didn't know how to set up animations in unreal. But then I realised the weapon, I had purchased from the marketplace,  came with animations, and a pair of arms; so I just used this instead, although it did come with problems, I will go into more detail about this later.

The Town
I spent a lot of time trying to make the town a thing, I created a big world in Unreal, I added loads of trees which I got from the Unreal starter pack, I created a mountain in the corner of the map- to give the game some scenery. However because of all the trees on the map, the project would take too long to load up, so I decided to delete a lot of the trees, but the problem was the fact that I was placing individual trees everywhere, when I really should have been using Unreal's foliage tool- which created a large amount of trees as foliage, this makes them spend less time rendering, and saves a lot of memory.

However the biggest challenge I faced with creating the Environment in Unreal- was when I lost the project, and was unable to recover it. I don't know why is happened, but all my work on the town was gone- and this happened quite late in the project, so I needed to create a new as quick as possible. And I did, and I am quite proud of what I did in a small period of time- I basically made a more compact version of what I made before. The only building in the world is the Police department, which I where I decided to set the game. So the open world part of the game wasn't going to happen, all the game will be set around the police department- the idea is that the killer clowns have taken over the building, and the player has to clear them out. I also had an Idea which I don't think I put into the brief, I wanted to make some sort of enemy wave system, maybe instead of going in the building and clearing out the clowns, the player should defend the building from
the clowns.

I made a number of 3D models with I intended to use in the game environment, here are some of them:

Another model which is in the game, is a circus tent model. I did not make this model, I downloaded it on turbosquid.com for free, however I did give it some colour. As you can see in the image below, it's a pretty decent 3D model, it also came with some flags attached, but I deleted them as them were not animated, and were posed as if they were blowing in the wind- it also can with no textures.

Weaponry
In my brief I wanted my player to have an M4A1 assault rifle and a Glock pistol for a side arm. I didn't manage to get the Glock, but I did purchase an animated M4A1 from the Unreal Marketplace- for about £10. The reason I bought this, was because of my lack of 3D modelling experience, I thought there was no way of me making a decent gun for the first person shooter- and the guns are very important parts of the first person shooter. The weapon was also fully animated in reloading, and even came with a pair of arms, and other animations- such as a prone animation, a aiming animation too.
However now I am having problems with this, as my character seems to not move at all, as of when I am writing this I still have not solved this problem- which came out of nowhere.

In my brief I wanted the clowns to carry numerous different weapons, but I didn't have the time to make all these weapons, so I will just give them the assault rifle the player has. 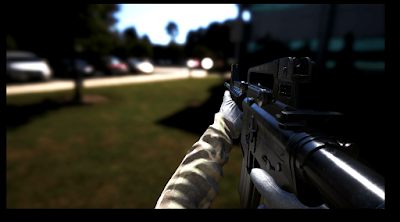 Evaluation
Overall I think the game was a overly ambitious failure, I planned the game to be something I couldn't do- an open world FPS, so I stripped it down to a basic FPS with one level- and this was easier to work with. I definitely learned a lot from all my mishaps, and I am now a lot more competent with MAYA. Although I could defiantly learn more about Unreal, as I still have a lot of problems with it.