The Purpose of Concept Art

November 23, 2016
Concept Art
Concept art is a more important part of games development than it seems, a piece of concept art will give games designers an idea of what game they are creating, and it might also inspire games designers in some ways. All games have to start somewhere- they usually start with a few simple sketches, this then develop's into concept, and that concept art slowly evolves into a game; the art itself could even explain functions of the game, and this gives guidance to the programmers. Concept art could also create a mood for the game, this is important because sound designers will need context for the music and sound effects they will create. This also applies for the writers of the games story line, some landscape concept art will help writers come up with a setting for the game- for example if the concept art shows a run down, dismal image of the town, they will write the games characters to fit the scene.

An example of a game that made a mistake by releasing concept are instead of promotional art, was "Might No.9"- this game was a homage to the Mega Man Series which was backed on Kickstarter for about $4 million, and this is what it seemed to be like through its concept art and early gameplay demo's; somewhere along the way the game changed from a dark and well shaded style of art, with challenging gameplay- to an easy and cheesy-looking game. The main problem is that they released footage og the game, to the backers of the game whilst it was still using Unreal Placeholder Assets- this means they were not the development teams creations; 3 years after this, the game was released, and it looked worst than the demo.


Stages of Concept Art
The definition of concept art is "an artistic rendering of an element or elements in a film, TV show, or video game, created as part of the development and visualisation of characters, costumes, environments, etc."  This means that concept art is more of a process than a singular piece of art, concept art starts with an idea in your head, it then becomes a quick sketch, and maybe a couple more sketches, each sketch might differ- this is a good way of comparing different ideas and concepts for whatever you are creating. The sketches don't have to look amazing, but its good to add shading, and improve some detail- this can help others understand what the art shows. Adding colour is important to a concept art piece, because different colour schemes can create different moods. After the concept art is complete, the piece of art should be made into a digital graphic- this could mean a 3D model, or a 2D sprite.

My Concept art
Now I will show some of my own concept art I made for my game, I am no artist, but I am working on improving my drawing skill.

Here is a Sawn-off shotgun which will be used by the clowns in my game. It was supposed to be longer, but I sometimes struggle drawing scale. 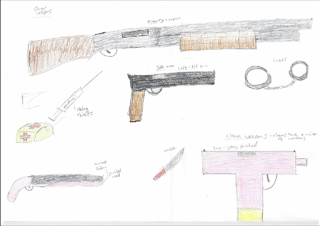 Here are a mixture of weapons and items I plan to create for the game. It includes concepts of handcuffs- which would be used to restrain an enemy. It also shows different concepts of a healing system- a syringe and a first aid kit are shown- a syringe would favour a more realistic game mechanic- but to achieve this realism you would need to animate a syringe going into the players body. A first aid kit- or a "Med Kit" is a concept used in many games. The concept has become a bit of a cliche, it involves a player walking up to the "Med Kit" and healing themselves instantly. There are also some pink weapons, which I thought would be a way of giving the clowns a weird set of weapons. 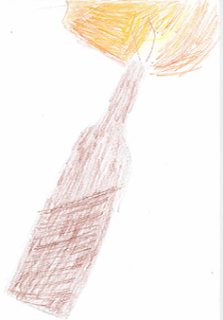 Here is a drawing of a cocktail bomb. 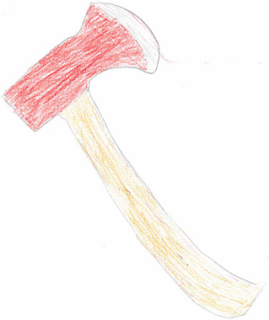 This is an axe, I might use it for melee enemies in my game, for example the weak and quick clown might run at the player with this weapon. 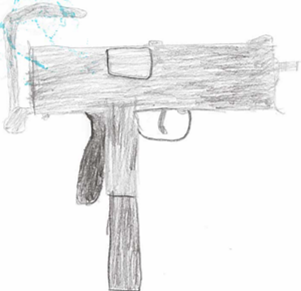 Here is a sub machine gun the clowns will be using.