December 14, 2015
Plan
I didn't exactly make a plan, but I did create a brief for what my digit graphics were going to be, I also made a mood board to show what type of game I was aiming for. I also thought about what the target market is for my game, and how the appeal of the game should be made to suit the audience. I also should plan for any problems which might occur during the creation of my digital graphics, the worst case scenario would be me loosing my work due to technical difficulties, to combat a problem like this I have backed up my digital graphics using my USB memory stick.

Time Management
Time management is very important when making a game. I had a deadline set, the deadline was to finish before Christmas term. For the deadline I need to create some backgrounds, and maybe a few more sprites.

Software interface
The software I have been using for my digital graphics are Game maker, and Photoshop, as well as Adobe Fireworks. I have mainly stuck to Game maker for the creation of sprites, I used Photoshop for some concept art, and I used Fireworks for a thumbnail sketch.

Asset Management
I have used good file naming conventions to save and backup my work. I have saving them with names that relate to the file, for example the images you will see later have been saved with names like spr_turtle, or background_resize.

My Sprites started off as a template I got off the internet. The original sprites were from an old game called "Ecco the Dolphin", they were on Google image search as a strip, strips are use to show the animation of a sprite. With this strip I had an idea to alter the sprites to look different, the reason I did this was to have a template of what a turtle animation would look like. I did not use all of the strip, because I thought it would be too much work to alter each of the sprites in the template, so I narrowed the strip down to 3 sprites, the moving animation shows a turtle moving it's flippers to swim, however the back flippers do not move, I did this because in real life sea turtles don't really flap them around much- they use them for a steering motion- I felt this will be realistic, and would tribute to the physics of the game. Before I started to use Gamemaker to edit the existing sprites, I imported them in Adobe Fireworks, in here I cropped them to make the image smaller, there were also some other sprites from "Ecco the Dolphin" but I didn't really need these.

Here are the altered sprites, as you can see the colour scheme is different, and the pixel art is a lot more simpler- because I am not an experience artist, and while changing the colours of the original template I had to change the shading which had been done by an experienced artist; after doing this I added some basic shading around the flippers of the turtle. I then started to think about the movement of the sprite, if the sprite was to go up in the game there was no sprite to show this action. So I then started to rotate the sprites.

Here are the rotated sprites, they have be rotated at acute angles to show the upwards movement of the sprite in game. When I did this I noticed that the sprites became more fuzzy, I thought this would be a problem, but then I thought that it could be used as motion blur for when the sprite moves in game. I used Gamemaker to do this, all I used was the rotation tool, I know this is not the most professional way of doing this, but Gamemaker is very simple, and very beginner friendly- and I do consider myself a beginner with creating and editing digital graphics.
Background

Here is an image of a background from the game- Donkey Kong Country (1994), I wanted to use the background in my game. Then I realised that there could be many copyright issues with this image, as it is someone else's intellectual property; this is bad because if this game were to release, I could be sued and the assets made from the game would have been seized and probably given to RARE- the company that made the game. So I decided to use this image as a reference for my own background instead, I also copied some of the colours from the image in Gamemaker editor. 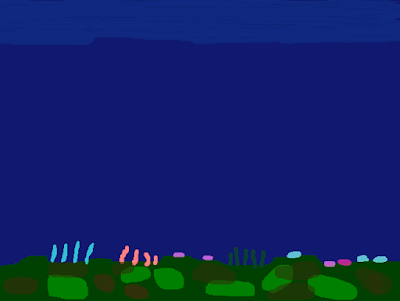 Here is the background which I created in GameMaker Studio. It's a very basic background, but this is because I am an inexperienced artist, and to be honest drawing a coral reef is not easy. In the background I show a range of colours which are all likely to be found in areas of a coral reef, these colours represent underwater plant life like anemone's.

I wanted to make my game in the a "maze" style platform game, in order to do this the levels would need boundaries.So I created some basic walls, these walls are meant to show sea weed.

Every games needs a challenge, many use enemies to make a challenge for the player, some use the environment to create a challenge. In my game I want the the enemies to slow down the players progress through the level, this makes the game quite difficult, and suitable to my game design knowledge, if I had the time I would like to make enemies that could both slow down and speed up a players progress, for example in the Super Mario series, enemies can be jumped on to kill them, but as well as killing the enemy the player gets a boost which makes them go higher than a normal jump would. The Enemies in my game are two Jellyfish, one is blue and looks quite angry, this one will be called "Sting", the other is a much calmer looking Jellyfish- called "Pinky". Sting will be more aggressive in his movement than Pinky; they will both follow individual paths, each path will cover a different part of the level, for example Pinky's path will go up and down, whereas Sting's will move horizontally across the level. Even though they have individual names, there will be more than one of these in each level. I intend to make more enemies, for example a shark or a whale as a boss of a level.

Digital graphics- My digital graphics were pretty decent considering I am not the best at drawing, I had to use a template to help me draw an outline of my main sprite, I did this because Gamemaker has a very basic sprite creation tools, when I tried to draw my own sprites I had problems with symmetry- by this I mean the pixels were not symmetrical.

Aesthetic quality- My game did have a suitable colour palettes, the colour were the colours which could be found in the sea and on coral reefs.

Ideas Generation- I came up with the idea for this game as I was playing one of the Donkey Kong Country games- which I would play when I was a kid- there are a couple levels which takes place underwater, I always found these levels hard, but also quite fun because it was like exploring a maze. The character of the game is a turtle, I wanted to use a turtle because there are not many turtle protagonists in video games, and generally not many similar games in the market right now; so it does get some points for originality in my view.

Following the brief- The brief given to me said  "to make a 2D platform game, with at least 5 levels, and have sprites which I have created myself." I have not created 5 fully functioning levels, but I have made some sprites. The reason of me not making 5 levels is because it would take a lot of time to create 5 individual levels, and this unit has been more about the digital graphics of the game. See this link for my game brief- http://danzgamingblog.blogspot.co.uk/2015/11/game-brief-p2.html

Graphics Specification- My game is a pretty basic game so it would be able to be played on mobile devices, so this is probably the best place to put it. If I were to improve it's graphics it could go on console as an indie game, this would make more money, as the mobile market is dominated by free to play games- and I would only sell at a small price; this would not make much money.

Overall I think the game I made has potential to become a good indie game. I will need to improve it a lot, and develop it into a fully functioning game.