The 2D game sketch which I have created is of a sea turtle- named Tank the Turtle, the game I wish to make will be about a turtle swimming through waters, solving puzzles, and surviving- it's basically an underwater platformer. My game sketch is not of best quality because it is hand drawn and I am not great at drawing- and the scanner did not capture all of the pencil lines.
The Graphics of the game will be pretty basic, there will be a lot watery graphics like bubbles, there will be coral reefs- these reefs will be used as walls. In the sketch to the top right hand corner there is a faint sketch of a level map, this level is like an underwater passage, it has obstacles and enemies which block the way- it's inspired by Donkey Kong Country series and the underwater level which were featured on those games.

The sketch of the turtle does look at bit plain, but I do want to give the turtle some extras, like a harpoon gun attached to his back- I just couldn't drawn it on. It's a bit of a risky idea too, the harpoon could affect the movement of the sprite, and the hit-box as well. I am also undecided on whether the game should be from a top down view(birds eye view), or side scrolling view. A top down view would probably be easier to make, especially since the character is a turtle, and a turtles sprite from top down is quite easy to make- as it is mostly shell. However a side scrolling view would be a much more fun game to play, and will be more popular.

The visual style of the game will be a lot more cartoon like than the sketch, to draw that turtle I had to trace it from a photograph taken from a photographer, real life turtles tend not to smile much when divers are taking photos of them, so my character looks quite grumpy- but I hope to change this, the reason I didn't draw a smile on them in the first place is because that would look silly. 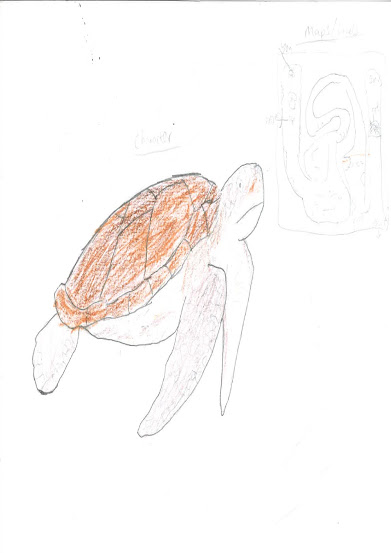